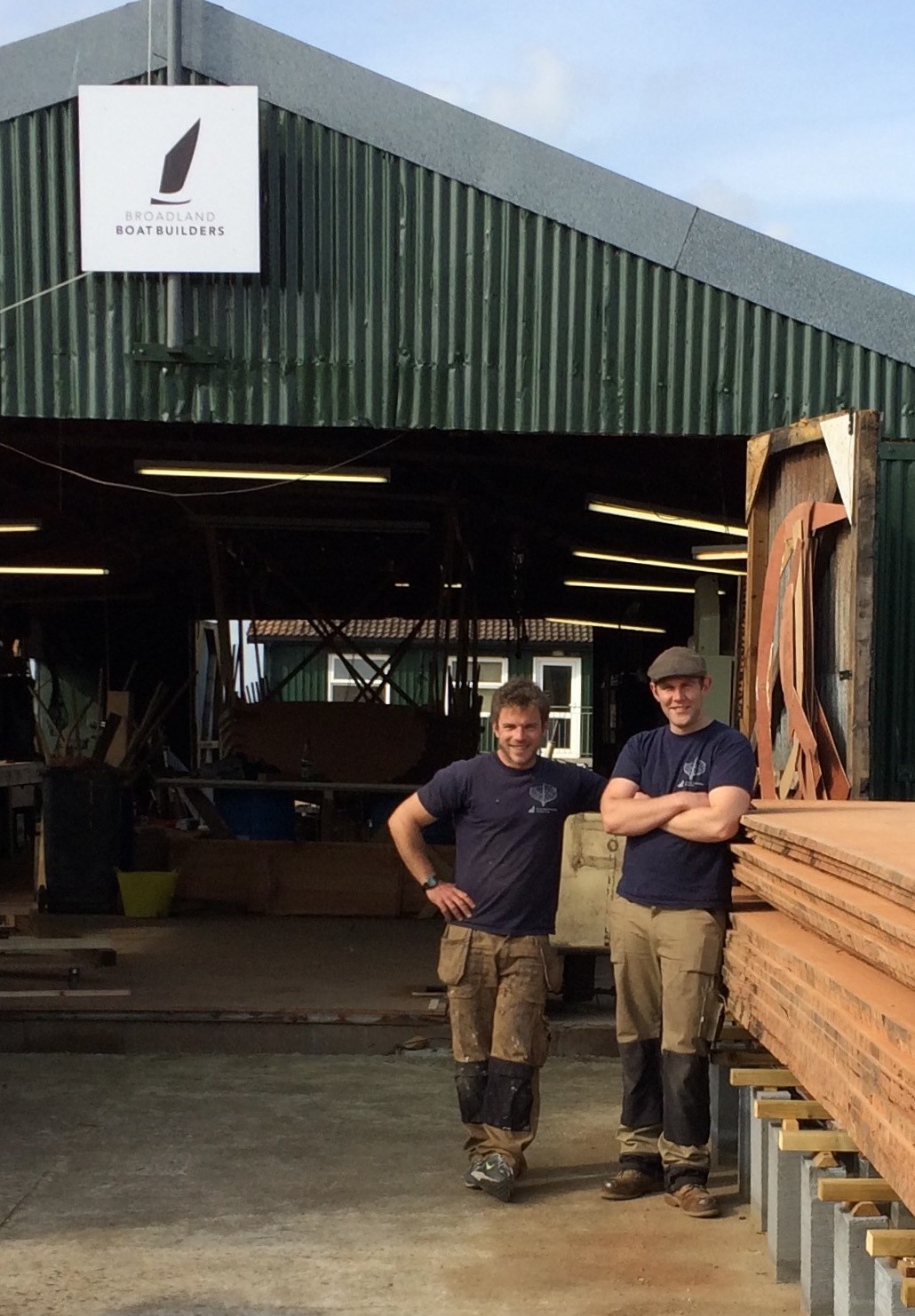 Where Are They Now?

Two former students who are making waves in the boatbuilding world are Henry Harston and Harry Grapes of Broadland Boat Builders. We caught up with them at their thriving new yard in St Olaves on the River Waveney.

Q: WHAT SORT OF WOODWORKING OR BOAT RELATED BACKGROUNDS DID YOU HAVE BEFORE COMING TO IBTC?
Henry: I Started sailing when I was 4 on Wroxham Broad and sailed most weekends since. I taught sailing for several years. I worked in Southgates boatyard as a ‘boy’ under Maynard Watson where a lot of “seeing how it is done” occurred. I skippered Wherry Yachts about Norfolk for a few years on the Bure, Ant and Waveney and have worked as pro crew on super yachts in the Med and on Pacific/Atlantic crossings. I came back to re-train for the future but I split the course with a summer away on big boats, as it was hard to give up the sailing!
Harry: I didn’t have much woodworking knowledge (I got a D at GCSE!) but as soon as I started the course I realised what I’d been missing! I have limited sailing / boat experience. I did learn to sail at a young age, but sadly my practicing of this beautiful activity faded into obscurity in adolescence.

Q: DID YOU LOOK AT OTHER COLLEGES BEFORE YOU ENROLLED HERE?
Henry: I Looked at other boat building colleges but thought their courses were too narrow. The IBTC develop a broader range of skills than other places, from large scale shipwright work through to new builds, restoration and fit-out.
Harry: I looked at other colleges but none specialising in boatbuilding. I was initially drawn to any woodworking course that was open to me. However, when I saw the level of training and hands on experience that IBTC offers so early on, I was completely sold. The amount that you learn, the increase in skill level and the state of mind that you come out of Joinery with is staggering.

Q: CAN YOU SAY SOMETHING ABOUT WHAT YOU VALUED DURING YOUR TIME HERE?
Henry and Harry: We valued the teams we were with enormously – staff and students. Ian Cook was probably our biggest inspiration. He encourages such high personal standards out of everyone he teaches and has a way of making everything fun, despite the occasional frustration at one’s self when he makes things look so easy. The college has a good family atmosphere, is welcoming and was very supportive to a wide range of individuals. A lot of boat-builders are inherently not academic, often the type of people who don’t learn in a ‘traditional classroom’, and this was noticed and reflected in the great teaching particularly from people like Pete Graham and Rob Harbord. The greatest value however were the skills that we learnt to allow us to develop a trade that we can earn a living from.

Q: STARTING UP YOUR OWN BOATYARD MUST HAVE BEEN A DAUNTING PROSPECT, BUT AN EXCITING ONE. DID YOU WORK ANYWHERE ELSE FIRST?
Henry: A very daunting prospect! At first we were just looking for a space to work in. Then the yard came up to rent and we couldn’t miss such a good opportunity. From a small idea of a space somewhere came two sheds with moorings, a basin and a hard standing! As previously mentioned, I worked in Southgates for a few years under Maynard and have grown up around boatyards, which gave me some background knowledge of the industry before I started the course.
Harry: I did a small amount of fit-out work on a barge before moving away from college, but other than that the IBTC alone has mainly formed my knowledge of boats and boat building. My experience prior to boat building was in television where I worked as a manager at a facilities company for close to 10 years, which is where I bring my business acumen to the table.

Q: CAN YOU SAY SOMETHING ABOUT LIVING AND WORKING ON BOATS IN THIS PARTICULAR REGION?
Henry and Harry: Norfolk has a very distinctive complexion when it comes to boat building and restoration. The Broads is an area full of well-maintained, ageing boats, where many other places in the UK would allow them to die out. Competitive one design racing ensures that a few classes of boats are always kept and maintained well and still hold relative high value due to their demand. There is a massive river cruiser class of predominantly timber boats which, to this day, is still expanding. There are also a large number of Broads Motor Cruisers that still run the rivers, which in their own way deepen the history of the Broads boats. However, the majority of work is in restoring and maintaining boats often built around the 1930s. So Norfolk has been a leading example of how to save and recover the souls of many old girls. We are very happy to be in the newest generation to carry this on into the future, and it’s the IBTC which is still keeping that possible by the skills they teach.

Q: CAN YOU TELL US ABOUT ANY INTERESTING OR NICE PROJECTS YOU HAD?
Henry and Harry: We have had some very interesting projects so far, ranging from delicate work such as the restoration of a Salcombe B class with full-length teak planking, to the modification and construction of a 90ft Dutch barge wheelhouse that now lives on the Thames. Other large projects include the almost complete rebuild of a traditional Broads Cruiser, and the renovation of a 1941 naval pinnace with a colourful history. We now have regular boats that come to us for annual works along with boats that moor with us throughout the season and thankfully these numbers are building each year.

Q: WHAT ADVICE WOULD YOU HAVE FOR STUDENTS HERE HOPING TO MAKE A CAREER IN BOATBUILDING AND RESTORATION?
Henry and Harry: Our advice for those students currently studying at IBTC, and also to anyone considering starting the course and wanting to make a career out of boat building/restoration, would be to work as hard as you can, keep your standards high and enjoy what you do. You have to have a real passion for what you do. There is a lot of work out there although it can be difficult to find, but if you’re doing things right, work will find you. It’s the responsibility of all of us who leave the college to keep these old girls afloat and maintain high standards, which in turn shall benefit the region’s industry and therefore the future of timber boats that we know and love. The IBTC instills an ethos of hard work, exceptional craftsmanship and always striving for the very best in terms of quality. These are all aspects we hope to carry on in our business for years to come.