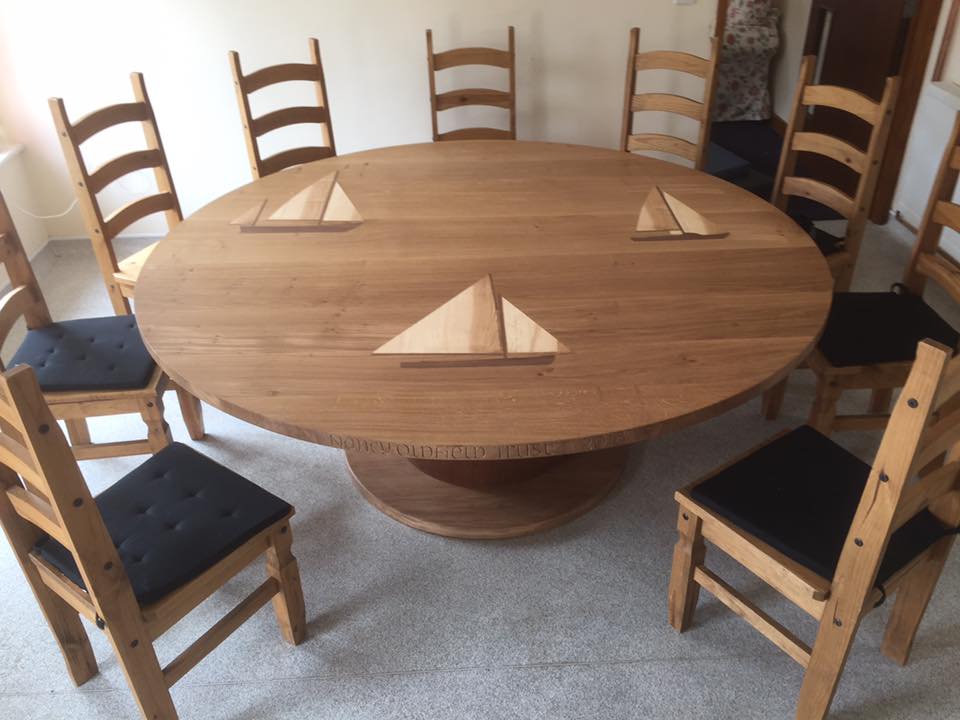 Thirty years ago I was living in a tent in Southern Sudan near to the Ethiopian border.  Nomadic tribes populated the area and occasionally they would wander into camp to inspect the three of us plus child, who were white and different. They were naked, yet in one hand they carried a spear and a small stool, their means of survival and their only comfort. The stools were in the shape of a T with a leather strap on the single leg through which they held it. This simple and beautiful piece of furniture made a big impression on me, at the time I was someone intent on getting more, rather than finding a way of flourishing with less.

Before arriving at IBTC as a mature student I had spent twenty-five years working on pre-war racing cars, mostly Bugattis and Maseratis. The college offered that same rare mix of doing fine and precise work on objects that were also very beautiful and exciting to look at. It was this same idea of an object being a practical solution with strong aesthetic content that drove me in the making of this table. I was coming to the end of my year at the college, when the commission for this table came in the form of an invitation. The IBTC was contacted by the Nancy Oldfield Trust to see if a student would be interested in designing and making a table for its residential wing. This amazing trust offers sailing opportunities to disabled people, there is no distinction between physical and mental disability. It means that some of their residents use wheelchairs and some do not.

To start the process, I went to their centre near Neatishead on Barton Broad in Norfolk. Stephen Bradnock who manages the centre showed me the dining room and we discussed how the table’s shape and height could work best for everyone who used it. I was keen to make it inclusive, a table for everyone, with no legs keeping wheelchairs out. We experimented with a wheelchair to see what height was needed, deciding on a round table made of oak. I went away to think about the construction, which essentially meant how to support it.I am someone who rarely says no. In agreeing to make and design the table I would have to learn how to make and design it!

Ian Cook, who runs the joinery shop for the college, still working in his seventies, has a very broad knowledge of technique gained from decades in commercial woodworking. It is a rare moment when he does not have a solution to a problem. So while the college kindly gave me a bench in one of the boatsheds to make the table on, there was an almost daily pilgrimage back to the joinery shop to discuss technique with Ian, he never failed to answer the stream of questions I asked him.

A two inch thick round slab of oak, 78 inches in diameter weighs a lot. The table had to be very stable, occasionally people want to stand on it. I decided on a column 24 inches in diameter, leaving 27 inches of the table top cantilevered out either side of the column.I drew out a rod for the column in section. 47 pieces of larch, a wood commonly used for planking in boatbuilding, each one planed along its length to an angle and glued together cooper fashion, that was the plan. I laid the pieces out, their lengths touching, and the outside face of the column facing up. I put masking tape along each joint, also three lengths of tape at right angles to the joints. With help the whole thing was turned over, glue brushed into the joints, then the most difficult manoeuvre, lowering it to the ground and shaping it into a circle. Three ratchet straps saved me from disaster. A similar process to fairing a mast was used to fair the column. Holding it in place on a bench and effectively sawing it with a long length of increasingly finer grit abrasive paper. It was the mother of all workouts.  It was clear that this structure was immensely strong in compression, but lacked something in its ability to stay permanently round. Using the straps again I glued a flexible ply to the outside and made close fitting bulkheads to fit inside. I was unsure about colour and finish so I put it to one side for the moment.

The table top is made of eight boards, loose tongues of half inch ply sit in 20mm deep slots on each board. They stop two inches short of the circumference. It was glued up using polyurethane glue. I made up a wooden trammel, screwed it to the underside of the top and marked out the circle, cut off the waste up to 5mm from the mark then attached a router to the trammel, carefully pushed it around hoping all the time there would be a happy ending when I arrived where I had started.

The top was placed on the column and I could see stability was a problem, this was designing on the hoof. I made up a disc with the remaining timber which was 14 inches wider in diameter than the column and put in a rebate to accept the column. Threaded rods screwed into captive nuts in the table top ran through the column and base, nuts clamping the three components tightly together. This was not only a strong and stable structure but also once dismantled it was the only way we would get the table into the building.

Stephen Bradnock at the Nancy Oldfield Trust welcomed my suggestion to have inlaid on the top representations of the sailing boats they used. It became part of the commission so easily, and yet I had never done inlay, did not know where to begin, and was certainly way outside my comfort zone in trying to do it. The sailing boats on the top are taken from simple line drawings of the same sailing boats the charity uses. The sails are ash, the masts and hulls American walnut. Deciding where to place the boats was agonising, I just kept moving paper cut outs about until it seemed right. Each piece of inlay was cut 5mm thick with a small bevel on the edge to help make it a tighter fit as it went down. Held in place using a hot glue gun, I knifed around the edge, the knife more difficult to control along the grain where it tried to wander. Close knifing was the key to a good fit. A small router took out the waste to within 1mm of the knife mark, and using a 10mm paring chisel I cut down at an angle from the waste side to meet the knife cut. This left the knife cut edge sharp and I never touched it again, even if it meant a slight undercut to clear the remaining wood. Once I greedily tried a larger cutter to get the waste out more quickly, it ended in disaster when I took a large bite out of an edge and had to do a repair. A mallet and a block of wood hammered each piece into place, glued with epoxy and planed flush the following morning. Some of the sails needed two pieces of wood and were joined using veneer tape.

There were two mishaps in the finishing of the table. The column was veneered with mahogany. It was ironed on using PVA glue. That all went well. I had not done any tests with finishes, for colour, shine or texture. So I should not have been surprised when a coat of clear Osmo oil brought the mahogany so much to life that it looked almost on fire. A tone so at odds with the other woods that I thought the whole table a complete failure. It would have to come off, and it did, tediously with a cabinet scraper. The thing was whether to go lighter or darker. After mulling it and doing tests, I went darker and got something close to the American walnut. The other mishap was more about me missing some plane marks on the top when doing the final sanding. The best part of a week was wasted while I sanded back to the wood and kept going until I was certain there were no marks untouched. The finish was applied a second time. On this large surface area the importance of good light from more than one direction is very important.

Gary Breeze, who won a gold at the Chelsea Flower Show this year, is also working at the IBTC. He is a very experienced letter carver and helped me design and cut the letters around the edge of the table. Nancy Oldfield Trust 2016.

On the base of the table I put my initials and an anchor. A powerful symbol for me. Killick is a naval term for anchor, the surest way to secure a boat at sea. Killick is also the name of my wife who died ten years ago of breast cancer.