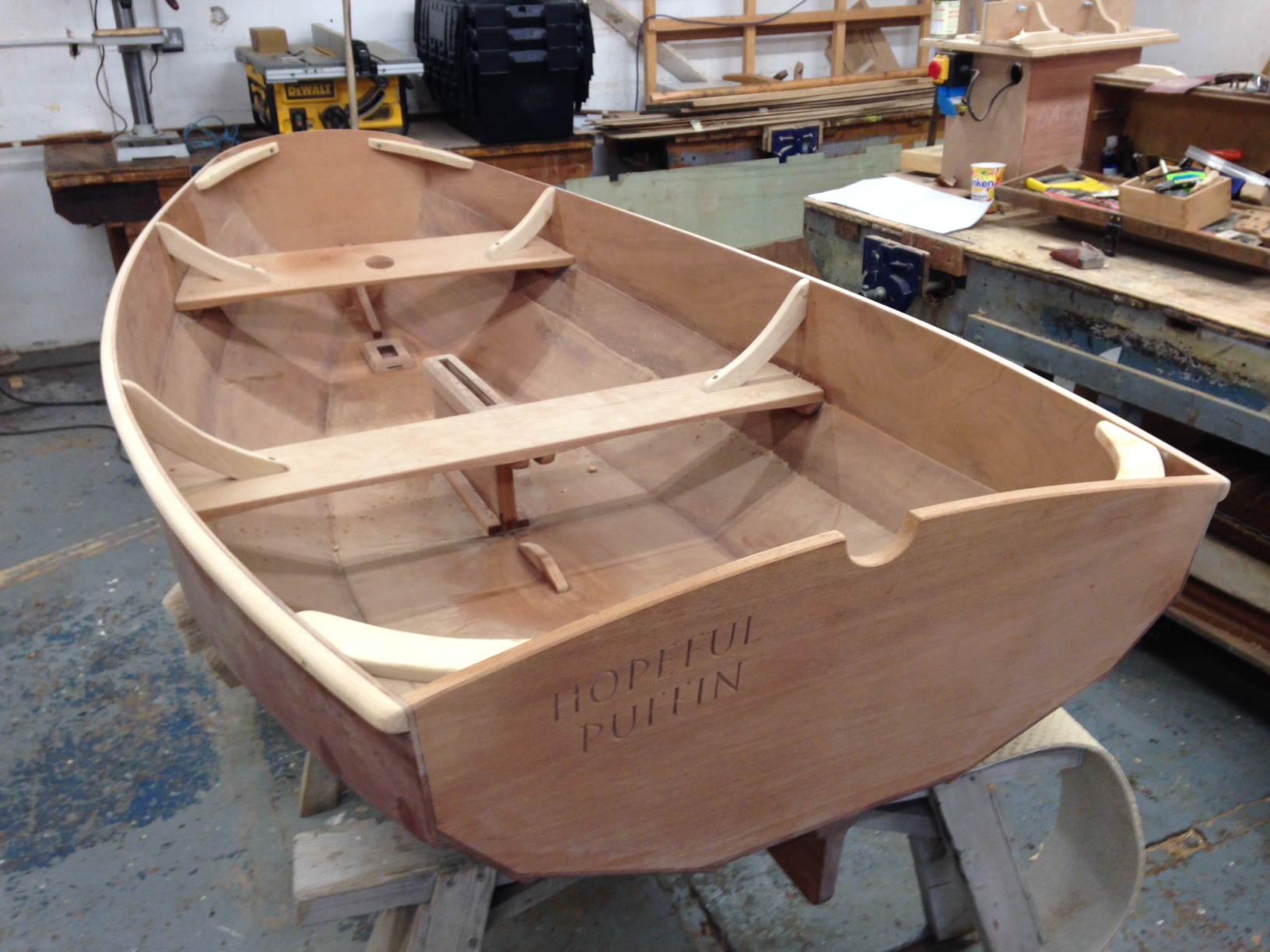 A few years ago, Gary Breeze bought plans for a small Mouse pram dinghy with a view to building one for his young daughter Rosalind. The plans languished on a shelf, however, until last year when Gary enrolled at the International Boatbuilding Training College at Lowestoft and was encouraged to dust them off. Gary tells us how with the help of his enthusiastic tutors he set about bringing the little Mouse to life.

As the owner of a clinker plywood Farthing built professionally by Phil Swift at Willow Bay Boats, I liked the traditional look of a clinker plywood boat and was drawn by the practicalities of owning a ‘dry’ boat built from modern materials. My Farthing, unlike some older plywood boats I’d owned (including three Jack Holt classics: Enterprise; National Solo and the ubiquitous stitch-and-glue Mirror), has remained completely watertight and easily maintainable even though she is now over 20 years old.

The Mouse is the smallest and simplest of Iain Oughtred’s designs, so I thought it would be ideal to build for my daughter.

I used WEST SYSTEM 105 Epoxy Resin® and WEST SYSTEM 205 Hardener with the addition of various specially designed fillers. Working with a high-grade epoxy makes all the difference. Fine craftsmanship and attention to detail at IBTC is essential and meat-and-potatoes to any boat builder worth their salt, but in reality the precise bevelling of the lands between the planks is an indulgence where epoxy is concerned. They could be glued to form an efficient watertight bond even if they were quite crudely fashioned. Being an IBTC student of course meant the plywood planks were carefully shaped and bevelled so that they lay together with no gaps. ‘Epoxy likes a gap’ has been a constant wry comment from my keen-eyed tutors where any jointing has not been absolutely spot on!

Having done a fairly good job of the bevelling, the lands were ‘wetted’ before being smeared with WEST SYSTEM epoxy and WEST SYSTEM 403 Microfibres® mixed to a ketchup consistency. A good 20mm overlap between the angled planks offered a generous groove into which more epoxy could be applied in order to create a smooth fillet – this time a blend of mixed epoxy and WEST SYSTEM® 407 Low Density Filler (containing micro-balloons) and WEST SYSTEM® 406 Colloidal Silica. The most difficult part of this sticky process is holding the compound curves of the planks together whilst they cure. Iain Oughtred and many other commentators on this method of construction, advise screwing or nailing the lap-joints throughout this stage but I didn’t fancy making holes in my expensive mahogany veneered plywood. I did use bronze screws just where the planks met the transoms and although setting things up took a long time, I found a system of ratchet straps worked well enough.

With the whole thing glued up it created a hull which is immensely stiff and strong. Screw holes, dents and poor filleting were finally tidied up and faired smooth with a mix of epoxy and 407 filler before a final rub down. I’ll be treating the bottom exactly in the same way as my old Farthing was built. A couple of coats of neat epoxy will be applied with a roller onto warmed planking before painting with a 2-pack polyurethane.

My daughter named her dinghy Hopeful Puffin after a ship in her favourite set of books, the How to Train Your Dragon series by Cressida Cowell. It’s the boat built by the young Viking Hiccup and is described as being almost completely round, leaky and with a mast that leans to the left, causing the ship to go round in circles in a strong wind. Here’s hoping our Hopeful Puffin fairs a little better!